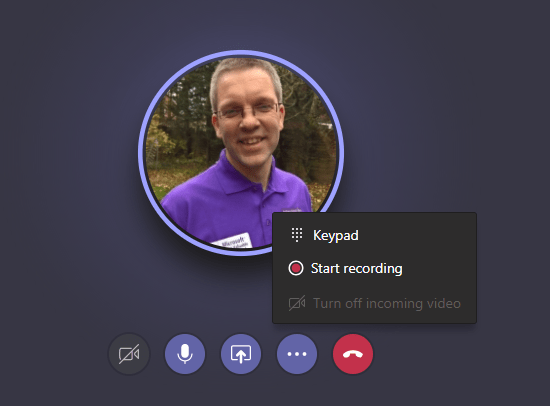 Time to start a meeting and get that recording of my meeting done.

I started by setting up a meeting with myself in Microsoft Teams. In my case I created a new team so that I didn’t have anybody else in the team who could possibly interrupt my call.

I added both a test user account and myself to the team so that I can organise a meeting with my two user accounts.

While I’m logged in as my test user I just started my call and I quite quickly joined as myself and the option to record the call is there.

When I look at the same as my test user I also see the record option.

If you don’t see the recording button then you might find that your administrator has set a policy to disable the recording feature. For more Details on this please have a look at 10 Policies to consider when implementing Microsoft Teams.

Now I’m going to join a 3rd time using my company account as a guest to the team. I now don’t have a record option available?

Why? It’s time to have a look at how the recording works first.

As one of my internal accounts I started recording the meeting.Microsoft Teams will now give you a warning that you should inform people that thew call is recorded.

The other people on the call will receive a slightly different message.

All internal users will now have the option to stop the recording. This is a bit weird, isn’t it? The reason behind this will become clear soon.

When you stop the recording there will be a message that appears in the conversation for the team that you’ve organised the meeting in. The recording will be saved.

After a while you will see that the recording appears in the conversation as  a recording.

Where are the Microsoft Teams recording stored?

Looking at the search statistics of my original post show how often people wonder where these recording end up. A quick look in the ellipses menu of the recording will give us all the clues that we need.

When I select the open in Microsoft Stream I get my recording. Ok, this looks a bit different from any of my earlier screen.

Even though my meeting was part of “My Test Team” and the recording was accessed through the link in the conversation in the My Test Teams general channel, within Stream I cannot find the recording. Ok, I started the meeting as with a meet now option within the team.

I went to Microsoft stream and found all my groups

Then when I visit My Test Team, I can see some recordings.

Ok, this is important.

If you want to record your meeting. Before you click on the Meet Now option you might want to think twice. How easy do you want to make it to find the recordings back? I’m quite sure that what I have described in this post might not be 100% planned/expected. I’m not sure if this is all by design or if there are some bugs here. However, personally I would schedule my meetings rather than using the meet now option for now.

More about recording in Microsoft Teams