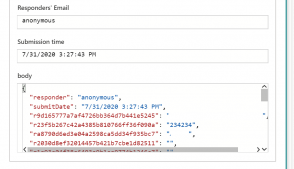 Microsoft Forms is great to create a survey, but what if you want to use Power Automate to process responses? Should you upgrade to Forms Pro?

If you have been using Microsoft Forms for a while then you will know how to create a new survey.

When you use Forms Pro you might have noticed the recent rename of the product to Dynamics 365 Customer Voice.

Notice that in Forms Pro you have multiple environments that you can select. So similar to the other Power Platform products you can separate your forms by environment.

Once you have a response you can get the details of the response.

These actions you can use for both Forms and Forms Pro.

For Forms Pro you have a few more specific actions.

That’s enough of an introduction to Forms.

So you are unfortunate enough that your organisation has Forms rather than Forms Pro and you have been asked to collect data from responses.

Now it is important to know what you can and can’t do within Power Automate and what the limitations are of Forms.

The Get Response Details is easy to configure and for both forms and Forms Pro you will get the response details.

When you run a flow you will get for each question and answer.

And further down the action you will find a second representation of each question and answer:

In my case I wanted to create a flow that can process any Form without me having to adjust the flow too much.

For each of my forms the name of the questions will be different. So referring to those names means that I’m in trouble when I want to reuse my flow for a different form.

The Guids will also be different for each form. What to do?

If you have Microsoft Forms Pro then you are in luck! You can now connect into the Common Data Service to collect the questions from the Guids for each question using the List records action.

Without any further query specified you will get the details of all questions.

So now we can use the GUID to query the Customer Voice survey question entity and get our questions.

If you don’t have Forms Pro you will have to do some flow magic to remove the ugly number so that you can collect the data only and strip off the Guids.