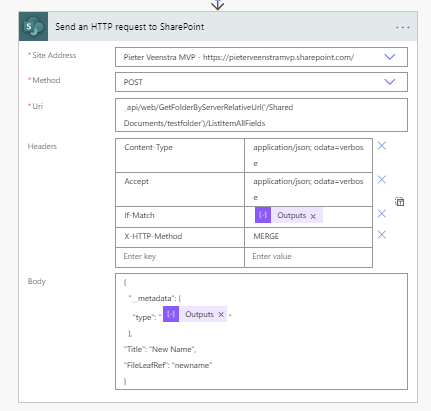 Have you ever wanted to rename SharePoint folders with Power Automate?

REST API call to use

According to the documentation the following two calls are needed to rename SharePoint folders.

The first call is to collect the odata type and the etag for the folder. The OData Type tells our REST API calls something about the shape of our data in our list. The etag identifies the document or in our case our folder that we want to update.

The second REST API call is used to do the actual update and to rename our SharePoint folder.

In my document library in SharePoint, I’ve got a folder called testfolder.

This is the folder that I want to rename to a new name.

Send an HTTP request to SharePoint to get the OData.type and ETag

Time to have a look at how we call these REST API calls in Power Automate.

We will start with a Send an HTTP request to SharePoint action and then I’m adding two compose actions. These compose action aren’t really needed. But when we look at the Flow run they make it just that little bit easier to understand our data.

In the above Send an HTTP request to SharePoint action Uri is set to include the SERVER relative url.

and for etag the following expression will do the job

Now we can look at renaming our SharePoint folder with yet another Send an HTTP request to SharePoint.

Now the final step of our flow to rename SharePoint folders using Power Automate. A Send an HTTP request to SharePoint. For more information about this action please see my user guide about using the SharePoint REST API

The Uri in the above action is set to

In this example I’m going to set the Title and the FileLeafRef to a different value so that later on it is clearer to see what goes where. Quite often you might want to make these match.

Then the last step is now setting the Title and the name of the folder to the values that we want. the internal name of the Name field is FileLeafRef and that will be what we will need to use to compete our Power Automate flow.

As the flow is successful, we would hope that the folders have been renamed. Time to have a look back in SharePoint.

Now my folder in SharePoint has been renamed to newname.

And the title has been set to New Name

And our mission to rename SharePoint folders has succeeded.